Hey – come break a sweat you lazy bum! The damn elliptical is talking to me now – I am out of rational excuses

When we first saw the house there was a odd little room off of the master bedroom that we couldn’t even get into – the previous owners had used it for storage and we could barely open the door – the shades were all drawn and it was full of boxes.

Once we moved in, we weren’t sure what to do with it either –  it is all windows on two sides and overlooked the pool – I thought maybe a place to put my drawing desk? However in the meantime we ended up putting the dog crates in there and, with great effort and straining backs, our barely used elliptical.

Fast forward a year and the room was still a mess – all the shades were drawn so no one could see into the messy storage room it was fast becoming – it looked uninviting both inside and out.

Finally I was tired of keeping the shades drawn and decided to get more of the bamboo privacy film I used in the master bedroom – at least from the outside it would look better.

Of course once I did that, it needed a coat of paint to brighten it up and although the dog crates remain in the corner since we need a place for them anyway, the whole room became a little more inviting – perhaps inviting enough to go in and use the elliptical occasionally?

Of course, with the privacy film you don’t have to worry about the pool guy or your houseguests coming to sit outside with morning coffee, only to come face to face with your most unattractive, red faced, sweaty self – another excuse to skip exercise bites the dust… 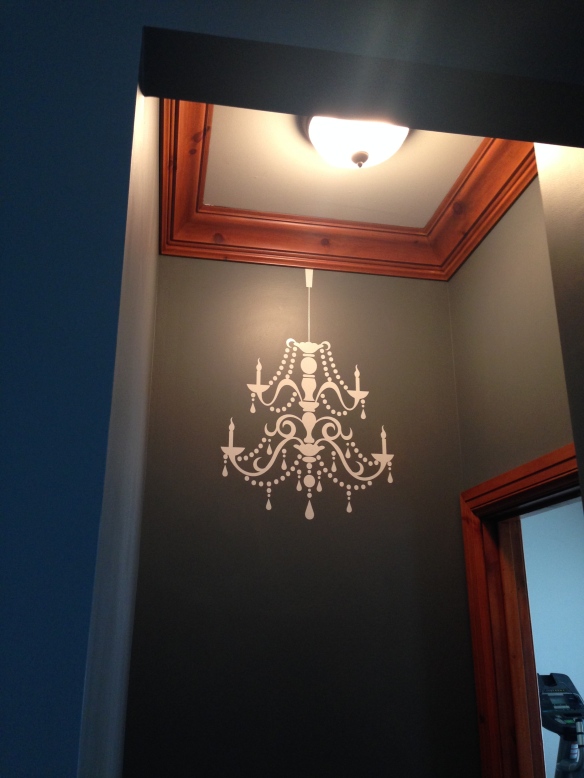 Boob light that dreams of being a chandelier LOL

A trip to Costco and an impromptu purchase of a small, smart flat screen TV later – we have a light and bright, no longer an eyesore room, with the ability to watch some distracting shows to make the elliptical less of a chore. There is a little odd corner hallway that leads to it with a boob light (I always call them that – the most boring light fixtures ever but they are everywhere) I added a fun chandelier decal as a fake shadow for that sad little boob light who dreams of being something more fabulous LOL.

Only time will tell 🙂

So given that I have been derailed by the grand chicken coop caper, I thought I would just post a couple smaller projects that I was really happy with.

First of all my entire palette for the new house was dictated by a fancy fabric I fell in love with even though it took 4 months to arrive.  I just decorated around the missing fabric till it showed up. Thankfully it looked the same when it did arrive.

I had bought a giant ottoman to use a a coffee table that I got a screaming deal on because the fabric was so unbelievably ugly.  I had just tossed a throw over it when we moved in so I didn’t have to look at it  – so the very first thing I did when the fabric arrived was recover that bad boy.

Honestly, a staple gun and an hour is all it took. Trickier was the nail head trim that I picked up at a fabric store. It comes all attached in one long piece so you don’t have to nail in individual nails. Supposedly that makes it easier to keep a level line – it was not that easy and I almost regretted using it but as long as you are not looking with a magnifying glass it is fine – I think I am just overly picky…

The good news is I love the ottoman now that it is recovered and with all the wood in my house and the leather couch the last thing I wanted was a wood coffee table – too much brown – this is much lighter and brighter and took very little time to do.

Once that was out of the way, I made a couple throw pillows for the couch and I plan to make some for the breakfast area too – but as I mentioned I got derailed by chickens LOL so I will have to get back to that another day

Another really easy project was for my windows – the master bedroom has lovely french doors that lead out to the pool area, which I love,  but the fact is, I am not the most tidy human in the world and don’t always make the bed and my husband has a tendency to leave clothes all over the floor. This would not be an issue if your bedroom is upstairs but when the pool guy or house guests are wandering around in back and can see right in to how messy you really are it is not so great.  I like to maintain the illusion that I have everything under control LOL

Because of this and the fact that I am too lazy to tidy up every morning before work, I ended up leaving the blinds closed a  lot which made it pretty dark in the bedroom during the day – this was just not working for me… Surely there was a better solution.

I did a quick search on Amazon and found this great window privacy film that looked like a pattern of bamboo etched on the glass. It was pretty inexpensive, came on a roll and used no adhesive so I wasn’t worried about ruining the windows or not being able to remove it if I didn’t like it

You literally cut to size –  spray water on the window – lay the film on top – spray some more water and use a squeegee to get rid of the bubbles. Thats it! No really – thats it!

If I change my mind in future,  I just peel it off and no residue is left behind

Close up of film