Hey – come break a sweat you lazy bum! The damn elliptical is talking to me now – I am out of rational excuses

When we first saw the house there was a odd little room off of the master bedroom that we couldn’t even get into – the previous owners had used it for storage and we could barely open the door – the shades were all drawn and it was full of boxes.

Once we moved in, we weren’t sure what to do with it either –  it is all windows on two sides and overlooked the pool – I thought maybe a place to put my drawing desk? However in the meantime we ended up putting the dog crates in there and, with great effort and straining backs, our barely used elliptical.

Fast forward a year and the room was still a mess – all the shades were drawn so no one could see into the messy storage room it was fast becoming – it looked uninviting both inside and out.

Finally I was tired of keeping the shades drawn and decided to get more of the bamboo privacy film I used in the master bedroom – at least from the outside it would look better. 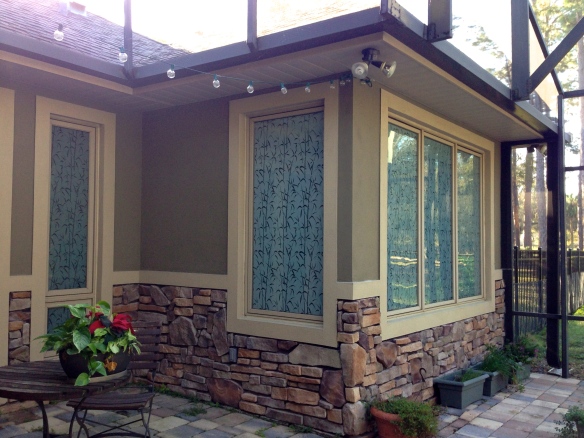 Of course once I did that, it needed a coat of paint to brighten it up and although the dog crates remain in the corner since we need a place for them anyway, the whole room became a little more inviting – perhaps inviting enough to go in and use the elliptical occasionally?

Of course, with the privacy film you don’t have to worry about the pool guy or your houseguests coming to sit outside with morning coffee, only to come face to face with your most unattractive, red faced, sweaty self – another excuse to skip exercise bites the dust…

Boob light that dreams of being a chandelier LOL

A trip to Costco and an impromptu purchase of a small, smart flat screen TV later – we have a light and bright, no longer an eyesore room, with the ability to watch some distracting shows to make the elliptical less of a chore. There is a little odd corner hallway that leads to it with a boob light (I always call them that – the most boring light fixtures ever but they are everywhere) I added a fun chandelier decal as a fake shadow for that sad little boob light who dreams of being something more fabulous LOL.

Only time will tell 🙂