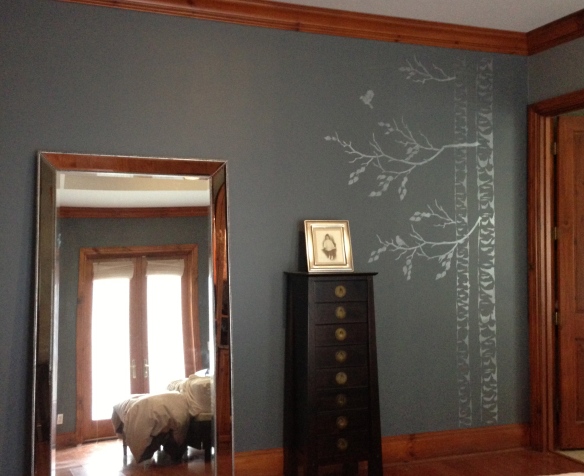 A lot of decorating trends are back again. Wallpaper has made a huge comeback. Seems like only yesterday wallpaper was old fashioned – but it is back with a vengeance. I have used it in several rooms in the new house – despite getting funny looks and unsolicited negative advice (Don’t do it!)  from strangers when seen buying wallpaper paste LOL

More surprising to me however is the return of stencils. Remember when crafty DIYers were running around in the late 80s stenciling fruit and ivy leaves on everything in sight? Come on you know you did it too – Fess up!

Well when browsing for ideas for the new house I stumbled on quite a few wall decals and then wonder of wonders a stencil site. Stencils it seemed had made a comeback – gone were the pastel fruit and leaves and in their place really quite nice contemporary designs.

Once we moved in and the decorating frenzy started I kept looking at the couple stencils I had purchased and kept deciding against them for particular rooms. Then one stormy weekend the scribbles on the master bedroom wall were just too much to bear  –  I decided to to paint them over.

I painted the bedroom two shades of grey and decided it was time to try one of the stencils. Several years ago the trend of birch trees was everywhere and I loved the look but since we were renting I never got to do it. So even though the birch tree look is probably passé now I wanted some damn trees on my wall. I found this great kit with the trunks, branches, leaves, catkins and birds all on separate sections so you could do your own interpretation. I had also already picked up a couple shades of metallic paint in silver and gunmetal and a sponge roller. 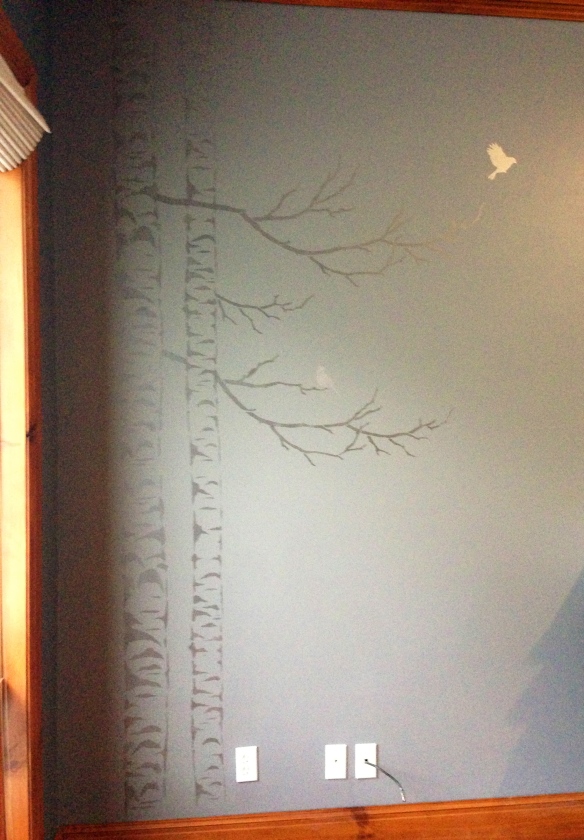 I have two large walls in the bedroom that really needed something big to balance other furniture so with a little trepidation I started in on the trunks. It was quick and easy you just need to make sure to roll off the excess paint on a paper towel before applying so it doesn’t seep under.

added a few leaves too

The first wall I did the gunmetal on the lighter grey wall with sIlver birds, then on the darker wall I flipped the stencils over and did silver – this time I added some leaves too.

And hey, if I change my mind it is just paint… 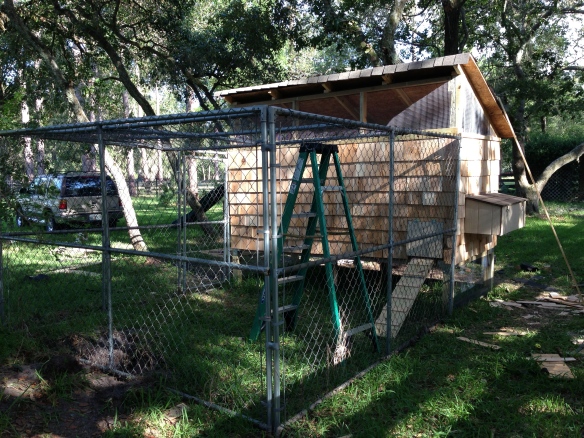 I mentioned in an earlier post that I had planned to only have 4 chickens so I bought a small chicken coop kit to house that sensible number of chickens to be but then apparently chicks are like Pringles – you can’t have just one and our plan for only 4 turned into 14 – don’t judge me!

In order to deal with this complete lack of restraint a larger coop was in order. We decided to reuse what may have been an old dog run that the previous owners had left in the backyard. A nice big 10 x 10 x 6 ft high enclosure with gate – all we had to do was build a coop onto the side of it and we would be off to the races!

After some online research I sketched out the perfect coop for our needs – Eric kept asking for “detailed plans” and I was all like “no need –  we can wing it – this will be fun!” Two trips to the hardware store later we were mostly still on speaking terms and we had just about managed to get a basic frame put together.

This Chicken Palace will be hurricane proof due to Eric’s love of lag bolts – this is what happens when you don’t give your husband detailed plans, measurements and front and side elevations LOL

I had the perfect plan in my head of course but building this in the backyard with a fairly uneven surface was a little tricky – but hey – its for chickens if the floor slants a teeny bit I doubt they will mind!

The first weekend we got the thing mostly framed in before the heat was too much and we went inside to the glorious AC. A busy work week followed and we had no time to touch it. 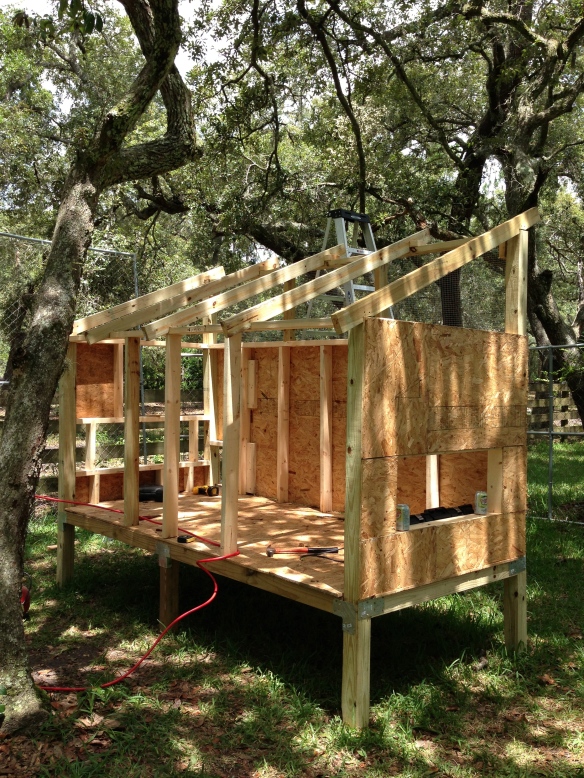 The following weekend we finished framing in walls and then started on the the roof rafters and shingles – of course we ran out of shingles right at the end but between the heat and the damn mosquitos eating me alive we were done.  I had to fly to Phoenix for business for a week so once again we were on hold – the chicks kept getting bigger and we were anxious to get them out of our garage…. 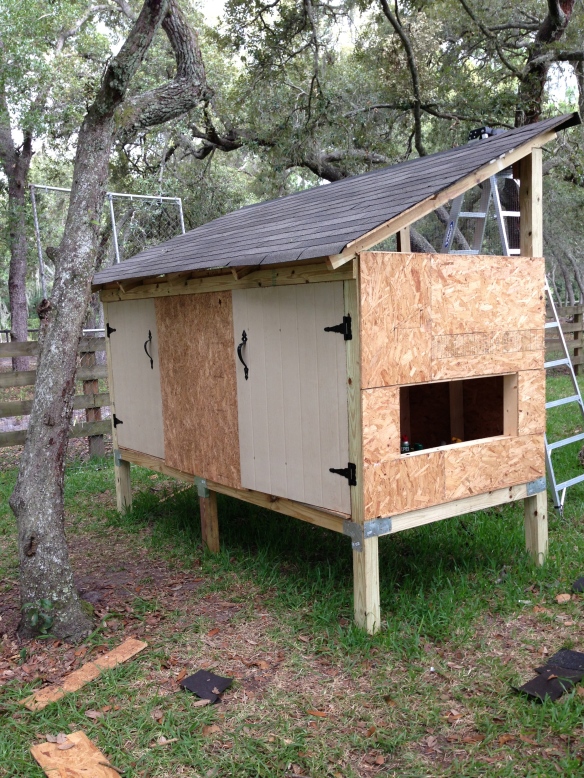 Finally the weekend of the 4th we put our noses to the grindstone and busted it out – these chickens must vacate the garage. The black sex links are escape artists and I would frequently find them running lose around the garage!

The heat and humidity are crazy this time of year an naturally everything takes a little longer than you think – frankly we have probably made the Fort Knox of chicken coops due to paranoia that raccoons will eat them LOL  I put up some nice cedar shingles since it is in my backyard and I will be looking at it every day I wanted it to be attractive.

Finally on Sunday – hot, dirty sweaty, exhausted – we transported the chickens out to their new home and they love it!!! It was fun to watch them explore their new home and find themselves a nice spot for a dustbath  – of course we feed them some grapes as a treat 🙂