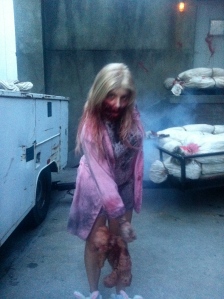 I have always loved Halloween it is one of my favorite holidays  – I love to get dressed up and celebrate – throw a costume party – watch at least a month’s worth of scary movies – turn the front yard into a spooky graveyard for the trick or treaters – whats not to love?

I have been a horror movie buff since I was about 10 years old. I would sit up and watch the Hammer Horror Double bill on Sat nights back in Ireland. I watched all the old B movies and Twilight Zones known to mankind and don’t get me started on zombie movies – I am ready to do a zombie movie marathon anytime. In fact when my husband and I were on a second or third date he asked if I had ever heard of Dawn of the Dead and when I said “Of course I love George Romero movies” his jaw dropped and he told me I was the perfect woman LOL

So finally after two years of living in Florida, we finally went to Halloween Horror Nights at Universal last night. As annual pass holders we could take advantage of getting in an hour early last night and beat some of the crowds. Well worth doing since the lines got completely crazy later.

Much to my shame, the dubious honor of first scream went to me before we even got into the park….. We had to pick up wristbands before we went in and a stilt walker (no scary costume – just a regular guy on stilts) jumped out from behind a palm tree at me and yelled “BOO!”  Oh for shame – at least my husband and teenager had a good laugh at my expense.

Once inside we had early access to a couple of the haunted houses – Universal’s House of Horrors and Alice Cooper’s Welcome to my Nightmare. 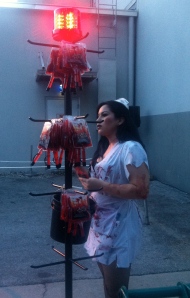 I have to admit this was, surprisingly given my halloween fan status, my first ever haunted house experience. Thinking back, I don’t know that they had haunted houses in Ireland when I was growing up – I remember a couple funhouse or house of mirrors things but that is not really the same at all. Then of course when you have kids you start doing all the family friendly Halloween activities – visits to the pumpkin patch, corn mazes etc

So I was looking forward to this – fully expecting I would scream just like I do on the roller coasters – but knowing they are not supposed to touch you and are just people in costume – how bad could it be?

Well the first one we tried was House of Horrors and although there were plenty of screams it was really more laughter – the house was pitch black and people jumped out at you around each corner. Yes we jumped but it is kind of a cheap scare – no real terror involved. Fun, but no big deal.

Next up was Alice Cooper – this one really freaked me out! Very dark and the characters and tableaus inside were much more twisted and frightening – or at least they hit on my personal scare triggers. I was suddenly wondering why I had willingly put myself in this situation. I was holding onto my teenagers shirt as we went through and I think I just about strangled him a couple times LOL

We hit Pen & Teller’s NewKD Vegas next and mercifully this one incorporated a little humor – good scary fun – Toxic vegas showgirls and Elvis jumped out at me and the 3D effects were a different take on just using darkness to disorient everyone. However, just as we were about to safely exit, one last character leapt out at me…..

Of course – it had to be a freaking clown! I hate clowns! I had a recurring nightmare as a child about an evil clown that sat on the foot of my bed –  long before Pennywise the Clown existed (thanks for cementing that fear firmly in my brain later in life Stephen King LOL) I even cringe a little at the ad for the Post Office shipping boxes that features the creepy clown doll.

So I went running out of that place like…well…. like a scary demonic clown was after me! My teenager pretty much laughed his ass off at me. Whatever – I wont be shamed – it was a freaking clown, people! Running away was the only smart thing to do!

After a break for some food and of course a blood bag jello shot purchased from a bloody nurse – much needed after surviving a walk though a shambling horde of hungry zombies in the street – we headed to Walking Dead.

I loved this one – I watch the show religiously. It was not super dark so you get see the zombies reaching for you though fences and shambling after you trying to eat your brain. It was really scary and fun for a zombie fan.

The last house we went through was Dead End – this was also awesome – they built a full on haunted house, exterior and all,  filled with all sorts or scary creatures – more traditional ghosts, ghouls and freaky spirits. I loved it! There was a couple really scary moments for me – one when a faceless woman came after me  – she was so creepy I just about ran up my teen’s back in an effort to get away LOL The second was when a Grudge style woman in white with long black hair jumped out at me. Those Japanese horror movies are another scare trigger for me – they frequent my nightmares anyway so I just about had a heart attack! 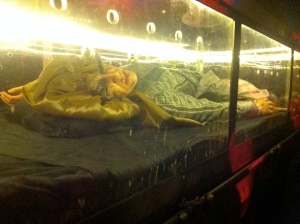 After that the lines were so long we decided to call it a night. Frankly all those constant adrenaline spikes are completely exhausting – After 5 haunted houses I don’t think I could have handled another one…

There are two houses left that we didn’t go through – Gothic and the big draw – Silent Hill. I played those games and they are the scariest video games I have ever played… If Pyramid Head jumped out at me I would likely drop dead from fear!

The good news is I survived and didn’t pee my pants  – the bad news is, I just need to work up the courage to go back – or maybe not…

I usually pick up a couple of cheap orchids and today was no exception 🙂 We bought some fresh produce and saw a dog just like Gizmo – a real first since she is a Chorkie and we thought pretty unique looking in her own scrappy way… but apparently she has a little twin called Koda running around the market.

My men geeked out and found a bunch of old school games for the original xbox and the Nintendo 64. I am such a packrat and still have all my old game systems –  so they have spent the last half hour dragging them all out and setting them up – there goes the rest of saturday afternoon. Now if we could only find some Dreamcast games….. 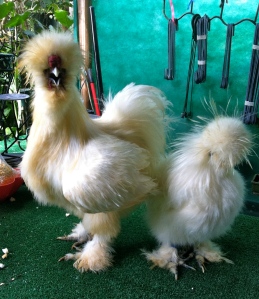 You looking at me?

We also picked up some delicious cinnamon glazed pecans that are completely addictive – once you start you cant stop. We have gotten them at a number of festivals or shows since we have been in Florida so everytime we see them we have to stop for some

Then just as we we thinking of leaving I spied some iron horse heads with rings in their mouths – all rusted up but so cool –  in a old junk stall. The lady wanted $100 for the pair but I haggled her down to $75 which I think is a good deal –  but then what the hell do I know?